"The LefreQue sound bridge is a great thing for wind instruments. It gives me a new dimension of sound, clearer articulation, better intonation. Good resonance of the instrument allows you to feel even the lightness in the mechanics of the instrument itself. All these blessings make me feel better while playing and completely indulge in music and deep emotions."

I especially thank Maestro Thomas Voigt for his trust
Dušica


Dušica Nikolic was born 31.10.1994. in Lazarevac ( Serbia) where she finished her primary and secondary music school education. She began her undergraduate studies at the Taras Shevchenko National University in Luhansk (Ukraine) in the class of Professor Olga Mihailovna Sobaljeva. Due to civil war in Ukraine she continued her studies at Academy of Arts at Novi Sad (Serbia) in the class of prof. Laura Levai-Aksin, where she also completed a master's degree. Throughout her education she participated in many official competitions of young musicians. The most significant:

She was improving herself with seminars and master classes with eminent flutists from the region and Europe such as Laura Levai Aksin (Serbia), Dejan Gavric (Germany), Michel Bellavance (Switzerland), Matej Zupan (Slovenia), Peter -Lukas Graf (Switzerland), Luisa Sello (Italy) Mario Caroli (Italy/ Germany) Renate Greiss Armin ( Germany) Carlo Jans (Luxemburg), Valerie Bebaele ( Belgium) Wally Hase (Austria), Olga Ivusheikova (Russia), Gareth McLearnon ( Great Britain), Carlos Bruneel ( Belgium) Nikola Mazzanti (Italy)
During her studies, she was a permanent member of the Academic Orchestra of the Academy of Arts in Novi Sad. She also performed in the BENSO Symphony Orchestra, Belgrade Symphony Orchestra, which won the first prize at the competition of young orchestras in Neerpelt, Belgium; in the Nis Youth Philharmonic; IPOC (International Prodigy Orchestra) Youth Philharmonic "Borislav Pašcan"; "CEMAN" orchestra of European young artists; "Fortress" Academic Orchestra, Orchestral Ensemble "Muzikon". She also performed with the chamber ensemble "Camerata Academica", playing contemporary music. She participated with the woodwinds quartet "Promaja" at the music festival "KotorArt" in Kotor, Montenegro.
As part of the education project of the Belgrade Philharmonic, she passed the audition for the position of first flute at the Orchestra Academy "Filhademija 3", in which she actively participated in the work process and professional development with mentors, musicians of the Belgrade Philharmonic. In the orchestral performance, she often plays the piccolo flute.
In 2019, as a part-time associate, she passed the audition for the position of solo flute in the Symphony orchestra of the Radio Television of Serbia in Belgrade. In 2021. school year, she completed specialist academic studies at the Faculty of Music in Belgrade - Department of Chamber Music with an average grade of 10.00 She is the winner of the award of the city municipality of Lazarevac for the creativity of young people in 2016, she is also the winner of the scholarship for the "International Forum for Flute and Piano" in Luxembourg, in 2018 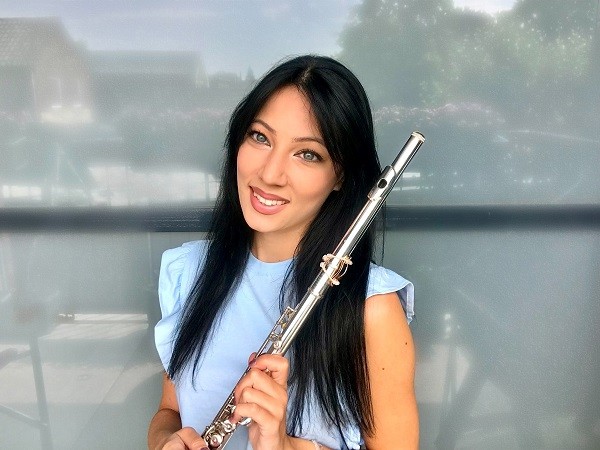