Principal Tuba of the Regina Symphony Orchestra, Tuba. Tuba/Euphonium Instructor at the University of Regina, Conservatory for the Performing Arts. Music Arranger and Conductor

"I have enjoyed using a solid silver lefreQue sound bridge and I can honestly say I am impressed with the results.  Intonation is noticeably improved on those troublesome partials, and a richer tone is present with additional harmonics in my sound. I am surprised to learn that all of this occurs with less effort on the mouthpiece, which is the goal for every musician: to play freely with expression while using less effort! ".

Mark Preece is Principal Tuba of the Regina Symphony Orchestra. As an orchestral musician, he has also performed with the Edmonton Symphony Orchestra, the Alberta Philharmonic Orchestra, and the Metamorphosis Symphony. Throughout his career, has had the opportunity to perform in Canada, the United States, France, Germany, Belgium, The Netherlands, and Japan.

Mark is the Applied Music instructor for Tuba & Euphonium at the University of Regina where he also coaches the U of R Tuba/Euphonium Ensemble. He is the Tuba/Euphonium instructor at the Conservatory for the Performing Arts, and is also on faculty at the International Music Camp in North Dakota.

In addition to orchestral music, Mark enjoys performing solo recitals and is also an active chamber musician. He is tubist of Big Sky Brass, Regina’s professional brass ensemble, and the International Tuba Quartet. He is a Besson Performing Artist and Clinician with Buffet Crampon Group. Mark’s passion for music education also keeps him in demand as a clinician and adjudicator. He works with bands, ensembles and soloists at regional and provincial music festivals with the Saskatchewan Music Festival Association and the Saskatchewan Band Association. He is a member and publisher of pedagogical materials with the International Tuba Euphonium Association and is an affiliate member of Andover Educators.

Mark is also an active music arranger. He has written arrangements for a variety of brass ensembles including Brass Band, Orchestral Brass, brass chamber ensembles as well as pieces for Solo Tuba and Tuba Quartet. His music has been performed and recorded worldwide, with performances by Big Sky Brass, The Regina Symphony Orchestra, the International Tuba Quartet, Queen City Brass Band, and The Fairey Band of Great Britain. His music is mostly self published, with some of his library available at Cimarron Music Press.

Originally from Ontario, Canada, Mark began playing the Cornet at age 7 in the Salvation Army and later, following in his father’s footsteps, switched to the Tuba at age 12. His love for the British Brass Band tradition lead him to pursue a professional music career. He received a Bachelor of Music (BMus) in Honours Performance from Wilfrid Laurier University under the instruction of Jane Maness. In 2004, he moved to Japan and became a member of Breeze Brass Band in Osaka, while also studying with Roger Bobo in Tokyo until his return to Canada in 2006. He received a Master of Music (MMus) in Performance from the University of Regina under the instruction of John Griffiths and Scott Whetham. Mark has also studied tuba with Rob Brown, Brent Adams, Patrick Sheridan and Sam Pilafian. 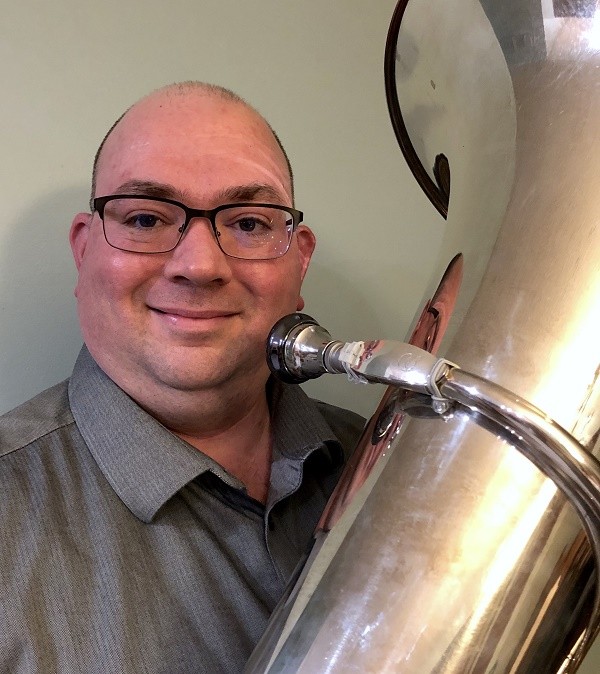