"Playing with lefreQue improves the intonation, stability, legato and -specially- makes easier to change the colour of the sound, which makes me feel more free in my musical expression"

Born in Barcelona in 1987, Frederic Sanchez took his first music lessons from his father, an amateur flutist, when he was four years old. At the age of six he began his music studies. At the age of eleven he attended Badalona Music School (Barcelona), where he studied flute with Jaume Cortadellas, and graduated with honors in 2005. He was later admitted in the Superior Music School of Catalonia (ESMUC, Barcelona), where he studied flute with Salvador Martínez (Principal Flute of the Valencia “Palau de la Musica” Orchestra) and with Vicens Prats (Principal Flute of the Orchestre de Paris).

Frederic completed his superior music diploma at ESMUC in 2009 and went on to study flute with Felix Renggli at the Hochschule für Musik in Basel, where he obtained a Master of Arts in Music Performance with the highest honors and performed his final exam with Basel Chamber Orchestra. After that, he obtained an Advanced Degree in Music as soloist and performed Carl Reinecke’s D Major Concerto with Basel Symphony Orchestra in 2013 for his final exam. For these studies he was awarded with the JONDE/BBVA Foundation scholarship.

On a professional level, he has been engaged to perform in the ranks of formations such as Basel Symphony Orchestra (as a trainee during the 2010-2011 season), then with the Royal Concertgebouw, the Barcelona Symphony Orchestra, the Barcelona and London Philharmonic Orchestras, the Orquestra de Cadaqués, the Kammerorchester Basel as well as the Dallas Symphony. He has been a member of Verbier Festival Chamber Orchestra since 2014.

He is a founder member of the wind quintet Azahar Ensemble, winner of the 63rd ARD International Competition. With the Ensemble he has played in concert halls like the Berliner Philharmonie, Essener Philharmonie, Musikverein Wien, Mozarteum Salzburg, Elbphilharmonie Hamburg, Palau de la Música Catalana, among others.

He lives currently in Basel. 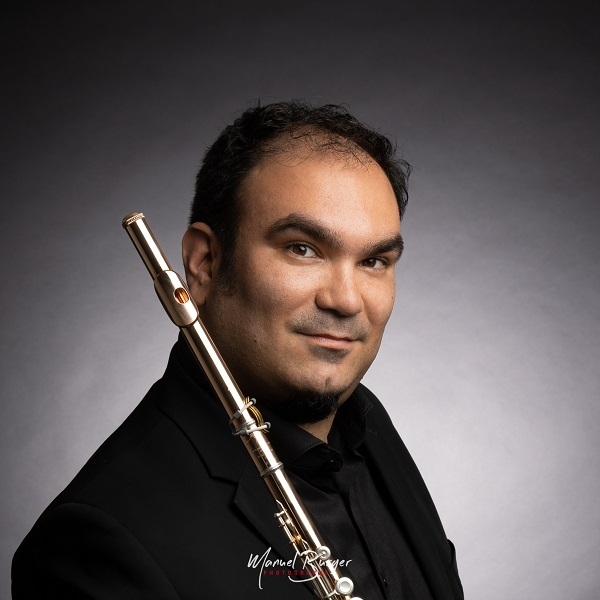