"We all love the way it has changed our group sound to be more rich, colorful, and equally balanced".

In collaboration with Naxos Records, the quartet recently completed the recording of their first album, which features the music of French composers Eugéne Bozza, Alfred Desenclos, Pierre Max Dubois, Jean Françaix, Gabriel Pierné, and Florent Schmitt.  This album was released in December of 2016.
As a recipient of Chamber Music America’s Classical Commissioning Program, the Kenari Quartet was awarded a generous grant that allowed them to commission a new work from Corey Dundee, the group’s very own tenor saxophonist.  This exciting project was made possible by the Andrew. W. Mellon Foundation, The Aaron Copland Fund for Music, and the Chamber Music America Endowment Fund.

The Kenari Quartet enjoys a busy performance and teaching schedule, having recently completed recital and master class tours throughout Texas and California.  The Kenari Quartet was a featured ensemble at Chamber Music America’s 2016 National Conference Ensemble Showcase, and in 2015 the group was highlighted on the American Public Media show Performance Today by taking part in a three-day Young Artist Residency.  The Kenari Quartet is represented by Jean Schreiber with Classics Alive Artists 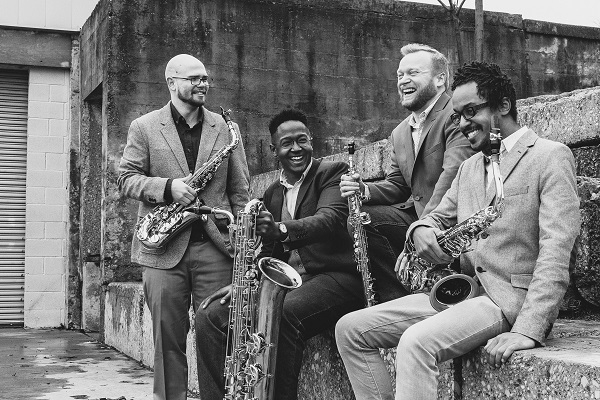